A Space I Don't Know

A Space I Don't Know is a solo TTRPG about being asexual, or part of the asexual spectrum, in an unfamiliar space where even the support of other queer people is not guaranteed. More broadly, It is about figuring out who is safe to out yourself to, and the found family that may be gained from doing so.

All you need is a deck of tarot cards and some sort of journal or method of recording things.

In order to download this game you must purchase it at or above the minimum price of $5 USD. You will get access to the following files:

Support this game at or above a special price point to receive something exclusive.

If you cannot afford this game due to financial hardship, you can claim a free community copy of the game. For every $5 I earn from my itch.io TTRPGs, I will add another copy.

A Space I Don't Know is a solo trpg about asexuality.

It's 17 pages, with a clean, easy to read layout and some cool custom graphics.

Setting-wise, you play as an outsider in a space. The default reason you're an outsider is asexuality, but advice is given for altering the game to fit other reasons as well. The nature of the space itself you'll need to define on your own, but a few suggestions are also provided.

As a solo game, Space does some creative things with how it approaches NPCs. Specifically, they're the Arcana in the tarot deck. They start showing up as you play. and you can choose how and when to interact with them, having small conversations in your head as you build their character based on prompts and associations with them.

I'm used to seeing solo games that rely on very direct, one-shot questions, but Space trusts you a bit more. You're building a worldscape in your head, and it wants you to do that at your own pace, to whatever extent you'd like. It's cool.

Resource-wise, Space has a comprehensive guide to tarot meanings, plus a guide to their meanings in the context of this game. It's thorough, it's easy to use, and you'll have to refer to it a bunch while playing, but it doesn't feel troublesome to do so.

Overall, this is a cool, social-feeling, solo game with a lot of great design choices. It explores a topic that can be personal and complex and intense, and it does so in a way that lets the player put a *lot* of themself into the game if they want to. If you like solo games, emotions, or explorations of identity, I'd strongly recommend checking this out.

-Page 8, Coming Out, "if you want to coming out" to come out

Thank you so much for the review! This is very sweet

Thank you for writing the game! 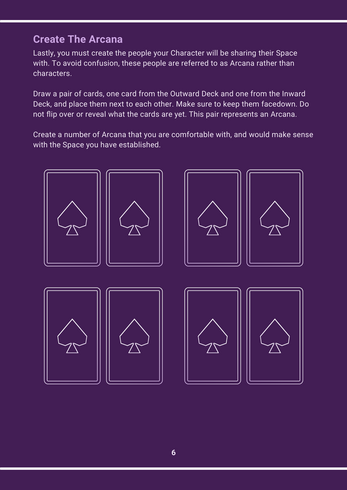 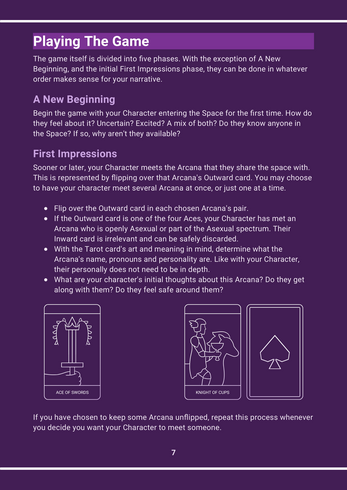