The Larkspur Sprite Pack is a sprite pack designed for easy modification. The sprites are flat coloured fullbodies.

The character was not designed with a specific gender, and can be gendered, or not gendered, as best suits your game.

If you’re interested in using my sprites commercially, I’d ask that you commission me for custom sprites instead, or use these sprites as merely a reference.

The Larkspur Basic Pack is designed to be simple, but easily modifiable. It is aimed at people who are not artists, that just want sprites for their game.

It includes a PSD which contains a base with both a flat coloured layer and a lineart layer, allowing for simple colour modifications without affecting the lineart. This also allows using the lineart in the manner of a colouring book.

It has 9 included expressions, the parts of each expression bundled together in folders in the PSD file. These expressions are also included as PNGs.

The Larkspur Complete Pack is designed to be more complex, but ultimately more flexible and organised. It is aimed at artists, and those familiar with art programs, who want a base to build upon.

It includes a PSD which contains a base with each piece of clothing seperate, each with flat coloured and lineart layers. This allows new pieces of clothing and outfits to be created easily. Please note that there is no nudity.

Unlike the Basic Pack, the expressions are not bundled together, allowing them to be more easily mixed and matched. These expressions are also included as PNGs, ready for use with Ren’py’s Layered Images. 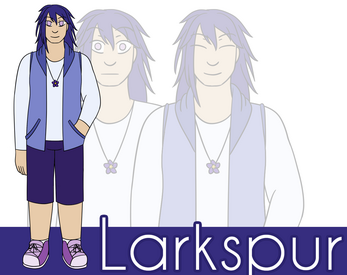