The Bonds That Tie Us

The Bonds That Tie Us is a GMless TTRPG about characters, and their relationships with each other; how they grow and how they fall apart.

Will the two best friends remain as close as they are? Will the newly formed polycule stay together? Will the rivals ever make peace with each other? Over the course of a few Chapters, such questions may be answered.

It is designed for 3-5 players, though it can also be used as a solo storytelling tool. To play, you only need six-sided dice, character sheets, something to write with, and a willingness to make things complicated.

The full pdf is 15 pages long, including the character sheet, and 12 pages explaining how to play.

In order to download this game you must purchase it at or above the minimum price of $5 USD. You will get access to the following files:

Support this game at or above a special price point to receive something exclusive.

If you cannot afford this game due to financial hardship, you can claim a free community copy of the game. For every $5 I earn from my itch.io TTRPGs, I will add another copy.

Reviewed this with Game at a Glance!

What a fantastic game. I love the mechanics and the sliding scale of Bonds. We talked about two people who met over a work luncheon as they went for the last deviled egg and met. Or someone who was working a convention who had a negative interaction with a co-worker because they would run off randomly and made a positive bond with someone coming around to play the games they were running.

It's a great way to establish relationships and could also be used a session zero-ish game between characters in any game if you want more of a deeper connection between them.

Definitely recommend if you enjoy playing through relationships with each other!

Ahh thank you so much! I love the scenarios you used this for!

The Bonds That Tie Us is a somewhat adversarial, multiplayer relationship rpg. Notably, it's not necessarily about romantic relationships---the PCs could be a high-school friend group, or business rivals, or the like---and the tone changes significantly the more distance you get from a conventional romantic setup.

The PDF is 15 pages, with a clean and easily readable layout and no illustrations.

Gameplay is segmented into chapters, but the book doesn't spell out particular events that need to happen in each---or ultimately how many chapters there are in a story. In that sense, Bonds is more of an engine than a specific campaign.

Overall, if you're interested in an small game that *really* integrates PC relationships into its mechanics, I would strongly recommend picking up Bonds. Its engine is extremely robust, almost like a universal Honey Heist, and I have a suspicion that stuff it wasn't designed to run (like survival horror) would work *really* well on it.

Thank you so much for the review! This means a lot to me! 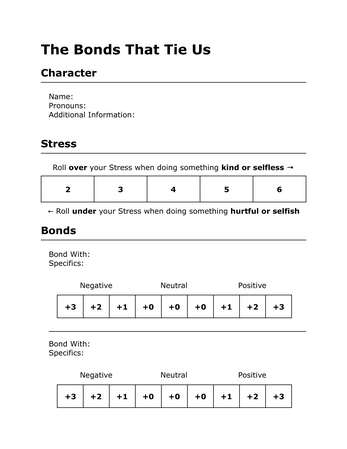 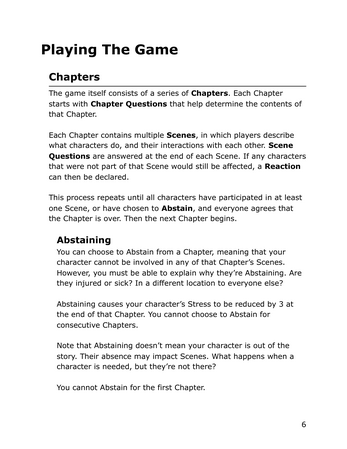